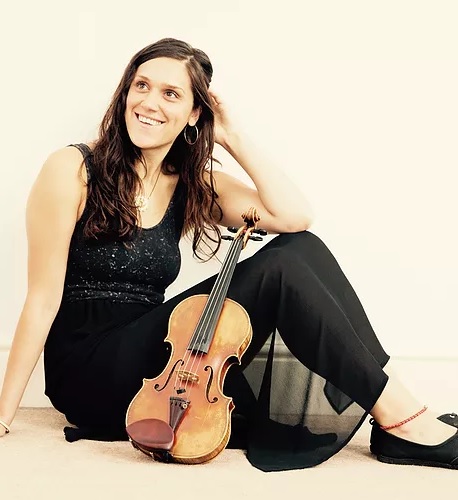 Simmy Singh is a classical and crossover violinist based in the UK who leads a varied and busy career. She was lucky to receive a first-rate classical upbringing at Chetham's School of Music and the Royal Northern College of Muisc and now prides herself on being a versatile and open minded musician. Simmy believes wholeheartedly in learning from and trying to immerse herself in as many different cultures and experiences as possible and in finding a way to incorporate these influences into her musical endeavours.

As a keen chamber musician, Simmy dedicated four years to playing with the Zelkova Quartet. They travelled the country and continent to receive world class tutoring on courses such as the Britten Piers Young Artist Programme and the European Chamber Music Academy. Following their undergraduate studies, the quartet went on to study and receive the International Artist Diploma in Chamber Music from the RNCM and also became St John’s Smith Square Young Artists. Their studies and opportunities led to them to performing in many of the capitals of music such as Oslo, Vienna, London, Cardiff, Paris and Moscow and to work with distinguished composers such as Sir Peter Maxwell Davis and Philip Cashian. Performances included numerous appearances on BBC 3 Radio’s In Tune, a BBC Proms Plus Portrait, a collaboration with the Leeds School of Contemporary Dance as part of the Huddersfield Contemporary Music Festival and even a performance for Her Royal Highness the Queen. Awards included the Chris Rowlands Chamber Ensemble of the Year at the RNCM and the Elizabeth Fawcett Award for Outstanding Chamber Music at the Royal Overseas League.

Since leaving the quartet, Simmy has continued to maintain a thriving chamber career and has most notably recently co-founded the Manchester Collective; a group of musicians dedicated to inspiring and challenging new audiences through innovative chamber music programmes in unusual spaces across the North.

As an orchestral musician Simmy plays regularly with chamber orchestras Manchester Camerata and Sinfonia Cymru. She enjoys leading and is leader of the Kaleidoscope Orchestra and has led the Manchester Baroque Orchestra and played principal second with Sinfonia Cymru (under the baton of Gabor Takas-Nagy), the Northern Chamber Orchestra and the North East Wales Sinfonia. Simmy also plays with the Halle and Royal Liverpool Philharmonic Orchestras.

As a crossover and contemporary musician, Simmy is the proud leader of the Kaleidoscope Orchestra - an orchestra fit for the 21st century whose most recent stage appearances include sell out gigs at both Gatecrasher Classical in Sheffield and Cream Classical in Liverpool; Immix Ensemble - a collaborative ensemble that merges classical musicians with local artists and composers; and Amika - a collaborative crossover string quartet who’s passion is in bringing their classical knowledge together with amazing artists from the jazz genre. Recently, the quartet have been busy in the studio featuring on upcoming albums by Alice Zawadski, Pete Lee, The Breath and Kirstly Almeida. In April 2018 they will make their Ronnie Scotts debut playing with Jordan Rakei and they are extremely excited to get touring with Alice Zawadski and Pete Lee later in the year.

Simmy highly values the importance of working with and being around creative musicians and in October 2017 she attended a self directed residency at the Banff Centre for Arts and Creativity in Canada. In Spring 2017, she gained a place on the Brighter Sounds Jazz Director Series - a project that brought ten of the uk’s best young crossover and jazz musicians to work closely with world renowned saxophonist, Chris Potter. She also leads the Sinfonia Cymru ensemble for the Birdsong - Can Yr Adar project, a collaboration between the ensemble, Gwilym Simcock and Kizzy Crawford, with the album due for release early this year.

Simmy has always had a keen interest in electronic music and has recorded for Manchester producers, Shunya and Hunrosa. In 2016 she spent a year touring the UK and Europe with electronic artist and producer, Werkha (Tru Thoughts Records) and appeared on his debut album ‘Colours of a Red Brick Raft’. The two artists now hope to collaborate and write together in the future. Simmy has also worked closely with BBC Radio 1's Benji B and arranger Grant Windsor as part of Deviation Strings, with highlights including playing principal second at a sold out Royal Festival Hall performance with the Deviation String Orchestra and Benji B and a Red Bull Miami Rooftop performance with the Deviation String Quartet. Both performances incorporated a live DJ set with live musicians. Simmy has also toured extensively with the Manchester Camerata for their Hacienda Classical series, which last year included a performance on Glastonbury’s Pyramid Stage.

Simmy revels in being involved in Manchester’s vibrant music scene and has worked with numerous local artists such as Lauren Housley, Sam Vicary (Hunrosa), Stuart McCallum and Steve Pycroft. Her creative career began with Manchester band, Biederbeck, for whom she wrote her strings parts and with whom she enjoyed a jam packed number of years gigging in Manchester and across the UK. Performances included Ronnie Scotts in London and Bestival.

Simmy’s latest musical endeavour is to focus on collaboration and journey further down the path of creativity. She has decided to return to study and has received tutoring from renowned musicians Bill Laurance, Steve Berry and Zack Broch. With them, she hopes to delve deep into the theory and approaches of jazz, to learn to apply this to the violin and to use her new tools to find her own creative voice. She is extremely excited about this new venture, all the doors it may open and about what the future may hold.