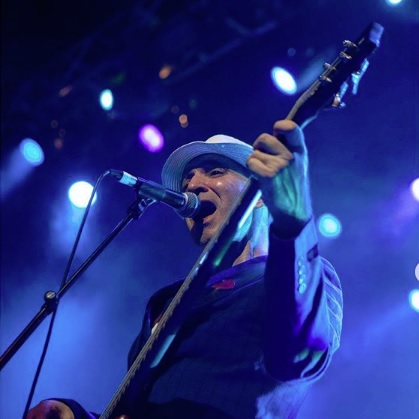 As the son of musician Jack Bruce (Cream), Malcolm has always been immersed in a musical environment. He grew up hearing and experiencing firsthand some of the finest musicians around, whether through his father’s frequent collaborations with musicians such as Tony Williams or John Mclaughlin, or Jack’s own bands with musicians like Simon Phillips and Mick Taylor.

As a multi-intrumentalist Malcolm has worked extensively on the international scene as a touring and recording artist. As a composer he has written for TV, Theatre and Education projects as well as solo releases.

Early in his career, Malcolm performed guitar and piano on Bill Ward's (Black Sabbath) record 'Ward 1', which included piano on a track featuring Ozzy Osbourne. He recorded with saxophonist Dick Heckstall-Smith, and featured on a Brand X compilation with 2 of his own songs performed with Percy Jones, John Goodsall and Pierre Moerlan. In the 1990s Malcolm toured and recorded with ‘Lost City’, featuring Rue Phillips and Kofi Baker, which included a double headline US tour with Edan Everly (Don Everly’s son).

Malcolm performed shows with his father over the years, in the UK, US and Europe. He appeared on several of his Dad's recordings, including 'Shadows in the Air' on tracks with Eric Clapton, and 'More Jack than God' featuring Dr.John, culminating in work on Jack's final album 'Silver Rails', recorded at Abbey Road Studios in 2014 with producer Rob Cass.

Malcolm has been touring regularly all over the world, playing shows in theatres and clubs across the UK, the USA, Europe and beyond, including venues in London such as The Jazz Cafe, The Troubadour, O2 Kentish Town Forum, Cadogan Hall and O2 Shepherds Bush Empire, and in NYC at Sony Hall, BB Kings, Iridium and The Cutting Room.

As a recording artist / session musician he has worked in many of the top studios in the world including Abbey Road, The Church, Livingston Studios (London), Sorcerer Sound (NYC), The Village Recorder, Oceanway (LA) and many more.

Recent live performance has included touring in the US with Leslie West and Corky Laing (Mountain), a 60 date tour as support for Joe Satriani across Europe, the US and Canada as part of Ned Evett's Triple Double, and a special Jimi Hendrix Birthday tribute at BB Kings in New York City with Eric Schenkman (Spin Doctors). He played a 10 concert solo UK tour as support for Andy Fraser (Free), and toured Japan and Germany with legendary guitarist Chris Spedding. He’s also been touring regularly in the UK and USA with his own band.

He is currently touring with The Music of Cream, a celebration of his father Jack Bruce’s band with Ginger Baker and Eric Clapton, which has so far toured in Australia and New Zealand, the USA and the UK, featuring Ginger’s son Kofi and Eric Clapton’s nephew, son of legendary engineer / producer Andy Johns (Rolling Stones).

Work is also underway on his first full scale opera, King You's Folly, based on an ancient Chinese mythological / historical story, to be premiered at Sadler’s Wells in London.

Malcolm released an album, Salvation (Pledge Music 2017), recorded in Nashville and London and mixed by Steve Orchard (Paul McCartney, Bela Fleck, Chris Cornell) and is currently working on a new EP to be released later this year.

Credits (performed with, recorded with, appeared on record with):